Italian Version of the report on Chimera Revo!

Spoiler: My English is not the best XD

For those unfamiliar with the FOSDEM is an European event in Brussels in Belgium dedicated to Open Source where there are plenty of talks and stands of various community to exchange information and learn about new realities.

Finally this year I decided, and I went with other Italian volunteers of Mozilla.

As you can see from the page with speeches there was everything but due to lack of the gift of ubiquity I could not follow all the talk i wanted.

In fact, at the end I could only follow the talk of the Mozilla world because also being organized very well I can enjoy the talk that I have lost the comfort of PC when they are uploaded to the site. It means that you too can recover the presentations and live a little FOSDEM.

Let’s move on now to talk of the FOSDEM that is the most important thing.

The evening before of the FOSDEM or Friday there is a FOSDEM event dedicated in the most famous brewery in Brussels or Delirium Cafe.

Hard to explain a room on three floors with a thousand people but it was a way to chat with other volunteers and have fun. Also to see live Zacchiroli who chatted (I felt like a child who sees the superheroes).

The air felt was Geek and Nerd 100%, Pebble everywhere, shirts very cool and also special decorations as the only ring (Sauron) in the neck.

The next day however we expected a cold day but not too much and the event itself!

The university looks great and divided into palaces recognizable for their letters, we head to the palace K that was the closest entrance we had found.

The palace K is the one with most of the stands and on the front we found Fedora, OpenMandriva, Gnome and KDE (near!), FSFE, OwnCloud, Tor Project, Mozilla, Xen Project, Puppet, Debian and OpenSuse. 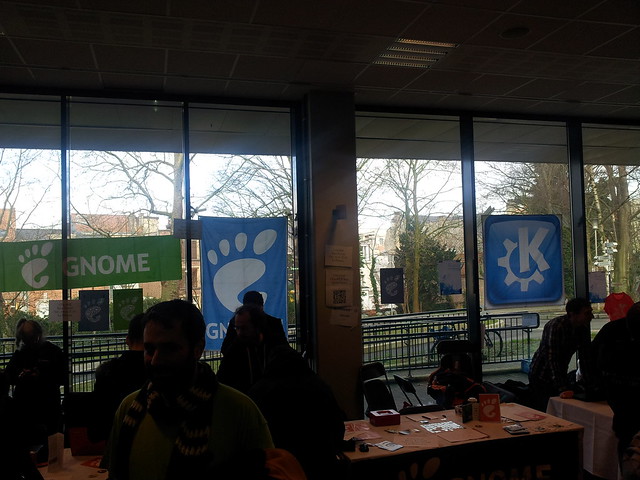 On the second floor there were the stands of LibreOffice, Perl, Python, MySQL, Jenkins, Eclipse and the GSOC. 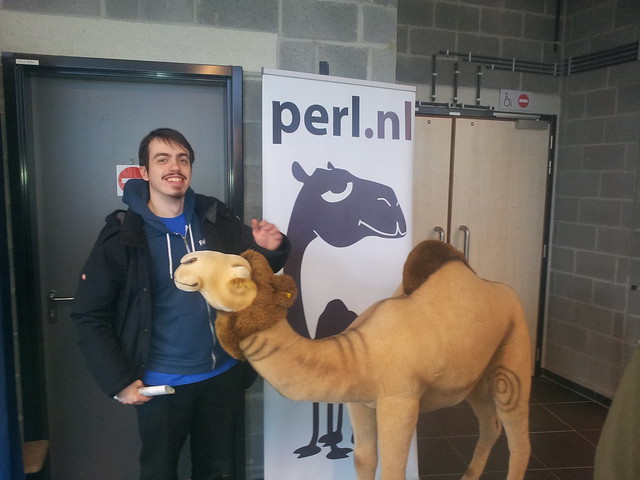 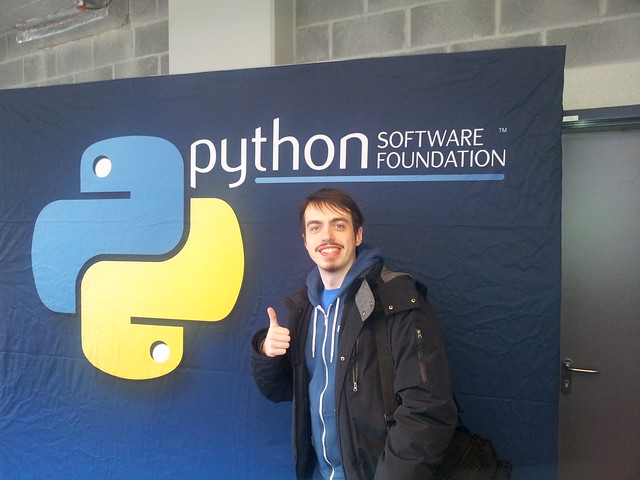 In short, a paradise for lovers of gadgets, which sometimes were expensive, but since all the money goes in donations is not a problem to spend some more money. Especially for things  handmade like this now are added to my collection.

The only talk I followed the first day was “A new version of Firefox is avalaible” who explained what happens to each public release of Firefox. 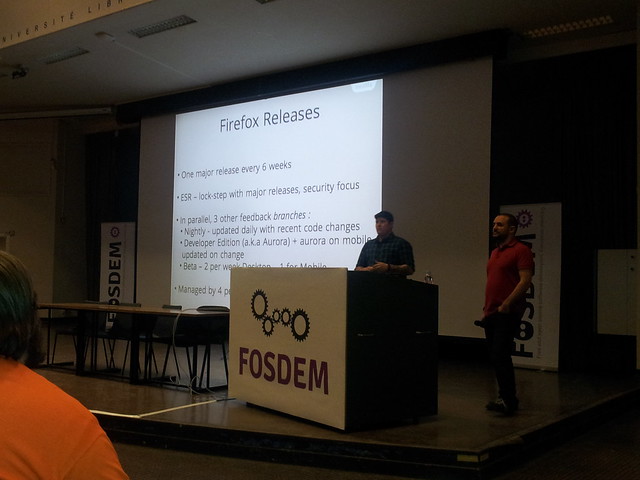 In short report bugs and correct them as soon as possible but clashing with the system of multiple releases. Mozilla has 4 branches of the development Stable, Beta, Aurora/Developer Edition and Nightly. When the beta becomes Stable Mozilla is in a position to work on features or fix bugs also implemented six months before because there is a release every month and a half.

Also on the first day release automatic updating only 25% of users (500 million users) so can work quickly to resolve problems.

So it’s not an easy job to keep up with all this but now Mozilla engineers are able to do extensive testing by collecting information on the characteristics of the computer (when launching the first time Firefox you are asked if you want to send this data anonymously).

Also at the release of a new stable before it is released new Beta/Aurora etc. must wait a week why they are performed a series of checks.

One interesting thing was reading the list of companies that contribute including Microsoft and Google that are direct competitors in the web but we must join forces and we can see it from the Web Compat Project.

Little explanation on the Web Compat Project that it is a site to track problems of the sites on the various browser to contact the owners. Also there is also a team dedicated to the problems of Firefox OS and Firefox for Android and the Italian is no exception!

In the afternoon I was able to attend one of the meetup that Mozilla volunteers organize when they meet in an event. This time the theme was the localization sprint or exchange ideas and suggest the best ways to engage new volunteers in this task (the translation).

Mozilla Italia in this area is very advanced because it is always in the front line for the translations, in fact I can assure you that there is a big revision work on every single string translated in Italian! Just go to our forum (is in italian) to realize this by yourself.

During the day I could meet Richard Stallman who came to bring the gadgets to the stand of the FSF (sorry he does not want his photos go on the internet), Italo Vignoli but also Enio Gemmo and Gabriele Ponzo of The Document Foundation. Only after I found out that there was also Lennart Poettering of systemd and other big.

The second day was opened by spending time in the Mozilla room.
Yes I have spent all day in there apart from a jump to a talk dedicated to Haxe titled “The Haxe language as a transmedia toolkit“.

For those who do not know what Haxe is a meta language that allows you to compile your code in other languages from PHP to Flash and so on. The language is born for game designers so that they write in a language and have their games on multiple platforms from Android to iOS and even HTML5 (also compatible with Firefox OS).

Returning to the Mozilla room I could hear many presentations of which I give you a summary.

“Using Firefox to debug web apps on any device” explained the features of the Developer Edition of Firefox but mainly the  Valence extension that allows you to communicate Firefox with other browsers like Chrome as well as the mobile Safari for iOS and Chrome For Android. In this way, debugging can be done with Firefox using its tools.

“Keeping secrets with JavaScript” who presented this new API for encryption in JavaScript.

“What’s new in Firefox?” (slide) was one of the most interesting because it explained the news that we had in 2014 and those that await us in 2015 on Firefox. Announcements of 2014 as Firefox Hello, Australis, the modal window to forget the history, the new research, the pull-down menu with icons and tiles.

In addition to a better integration of OpenH264, a possible integration of ShumWay (alternative to Flash built in JavaScript) and the stable release e10s but it does not end there! 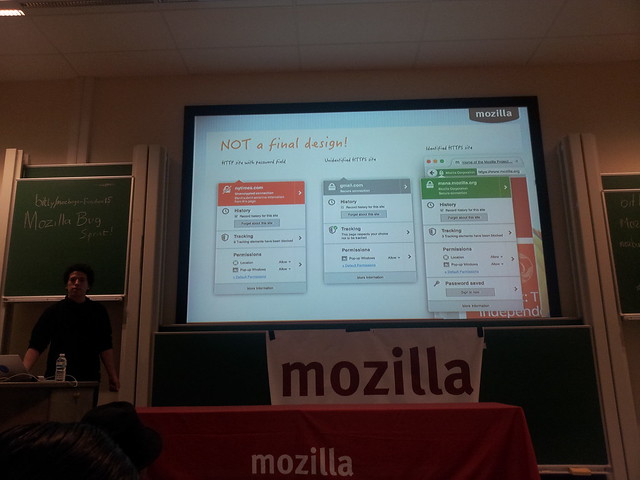 From the picture you can see a design is not final as it could become the dropdown modal of the site that will collect information in a better way the permits but also the issue tracking.

Also among the various proposals are to be able to suggest directly in the address bar suggestions for search terms and the reading list (which entered the Nightly in these days). 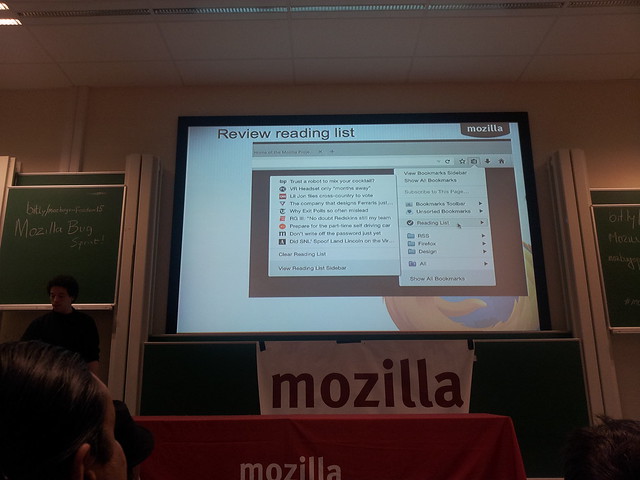 The presentation ended with the possible future functionality of Firefox Hello ie the sharing tab and cobrowsing. The audience questions were interesting as the possibility of group conversations and my about the integration of external services such as Google Hangout that are currently not provided.

“Participation metrics at Mozilla” was the most scary! 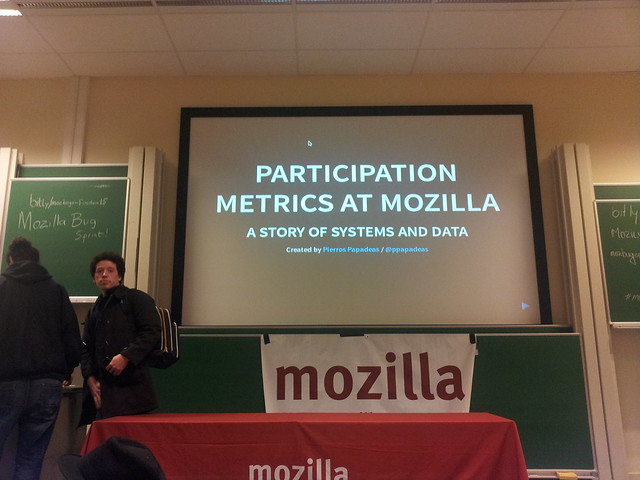 Why scary? The theme was the tracking information about the contribution to measure growth and evaluate where to invest. In a few words AreWeaMillionYet? which the current state does not provide much reliable information. 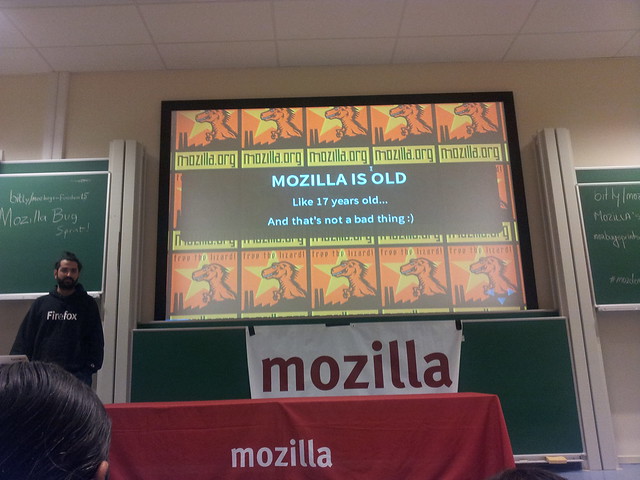 The problem in fact is the old age of the foundation! 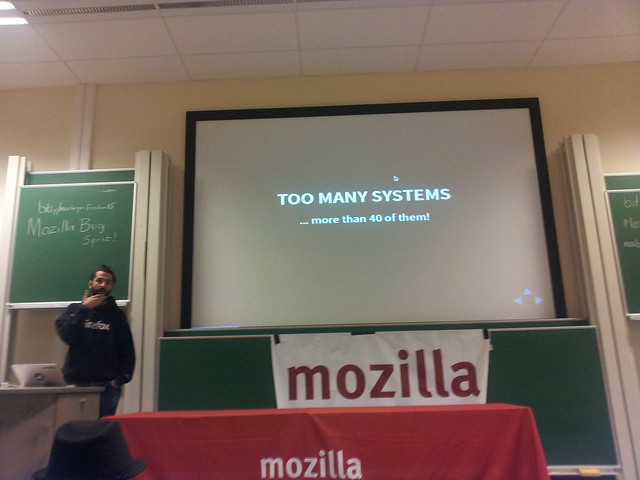 And of all the systems that involve not to speak of external sites to Mozilla!

“Maintaining & growing a technical community” explained that it is not easy to manage a community so great with the problem of documentation. 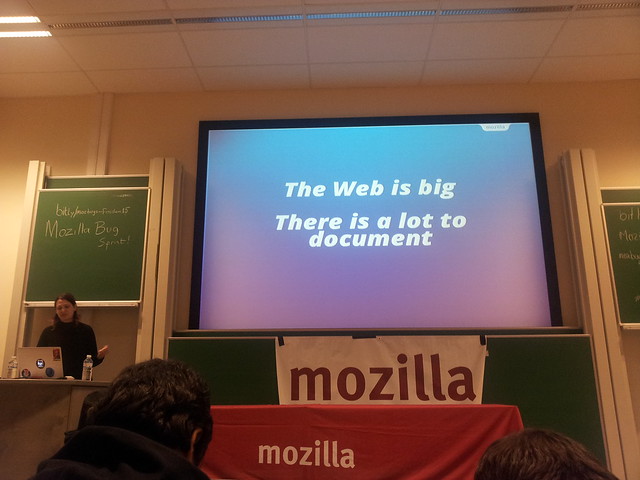 In fact, the talk went to Mozilla Developer Network that will document standards HTML5, CSS and JavaScript, and it is not simple task, as well translation. 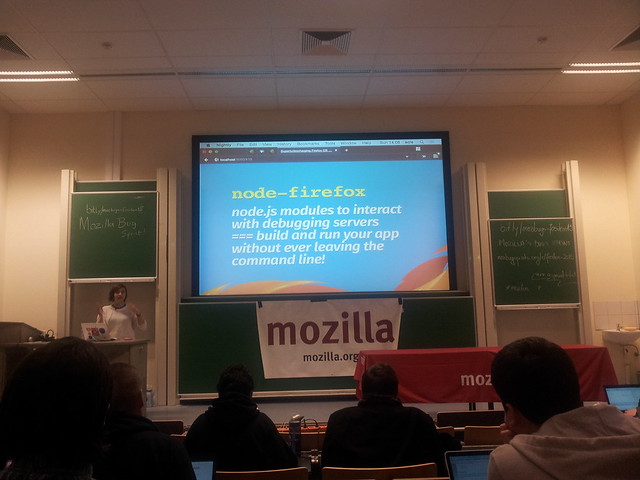 I had already tried the tool when it was in the experimental stage and is now being developed, organized and complete with all the necessary tools for the job.

“The Future of JavaScript” filled the room so impressive and it was interesting but it is not considered in greater depth because it was very technical.

“Servo (the parallel web browser) and YOU!” instead showed the current state of the future Servo engine that supports HTML and CSS, but an older version. Supports the very early versions of HTML and CSS standards, however, the speaker has made a small speed coding implementing on the fly the support of cookies in the browser within 5 minutes. I forgot that Servo is written in the new programming language that is made in Mozilla or Rust.

Servo thanks in Rust is thought to work in parallel and get the most out today’s processors by optimizing performance in an impressive manner.

So ends my FOSDEM. A leap into the future but also to demonstrate that there is always something really cool to try!

I look forward to watching quietly all the talk that I lost and study the slides!

I invite you to look at the links that contain references to talk with the videos and slide.