I remember when everything is started…

In November 2015 at MozFest London I experimented to do an extension with the new technology WebExtension and I said to me: I can do it, is standard html, js and css with a file that contain the information and load for me the file in the pages that I want.

The mainly issue was that I am a developer with no fantasy, so I never got an idea for months about do it an extension.

I started to follow the WordPress community in different meetings and started to join discussions localization on WordPress.

I was reached by Oleg (Italian translator), about an idea to improve Translate.WordPress.org with a browser extension because of my experience as developer and involved with Mozilla stuff. At the time I never done an extension only tests on Firefox that had a different technology.

The idea was to improve the website with the support of custom glossaries language based on the interface that at the time was supporting only the English glossary. I said I can try it.

Later during the first time that I invited my colleagues, Eugenio and Andrea in my city. We made a week end of work (I don’t remember about what) in my house and in a moment of relax I was experimenting with a prototype executed in the page with the Firefox Developer Tools.

So when I got a custom tooltip on the page (using the JavaScript API of the website) I ported on the 1.0.0 alpha release.

The extension wasn’t simple because I have to include the glossary that was generated with another script that got a lot of support of other communities.

With the first release I got a lot of interest and later I implemented a system to generate everyday the glossary for all the languages on a server and daily the extension was downloading based on the settings to let to localizers to have the last glossary.

I found a lot of bugs about languages RTL or with strange characters and added that support, also with a fake page for testing. The mainly issue was a regular expression to used to find the term inside the text without break the output (and this happened twice).

In may of the same year I did a talk about GlotDict during the first WordPress Translation Day remotely (24h talks about how to localize WordPress). You can see me on:

In this period to improve the GlotDict experience I become also a Project Translation Editor with global power on the portal for the Italian language.

This “powers” was helpful to clean up the localization I started to develop also other tools for the community like BulkRejectGP, that is a tool that use the Firefox unit test system to control the browser and click automatically specific buttons. This tool was made to help localizers to reject wrong translation on WordPress automatically using the consistency tool. AS Italian that was working on the localization of Wordpress with a new glossary there was a lot of problems. This tool helped a lot on cleaning multiple localization of the same term made during the years.

With using GlotDict and translating I added a lot of features on GlotDict and user usage grow a lot also during calls and WordCamp.

The extension got also an official icon by Crowedtent (greek translator):

An year ago with release 1.2.0 I added a settings panel with a lot of hotkeys and validations of the strings.

In the next release I added more validation like for specific symbols.

In the meantime GlotPress implemented few things of glotdict like the glossaries, so I chose to change the extension.

With release 1.3.0 I cleaned GlotDict and thinking what I can do on the extension? In that period I was doing a lot of review of many plugins for the Italian languages (as I can remember I reviewed like ~40000 strings, the number maybe is wrong but I can say that from 60 pages of plugins in queue we gone to 30).

With release 1.3.2 I implemented a review system to improve the speed: 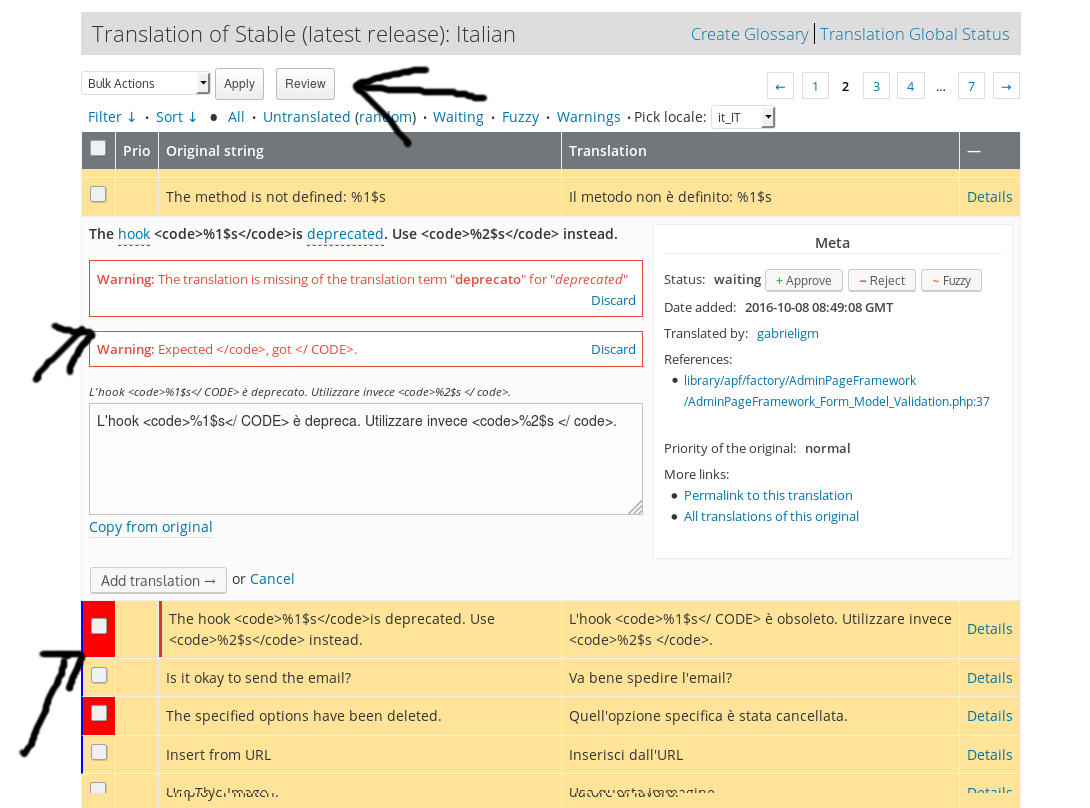 With all my interest on glossaries I made another talk on the next WordPress Translation Day about it (also at MozFest 2016).

This talk was made with a survey sent to the global polyglots community with different questions.

I developed also another tool, PteBot, where a PTE can subscribe and received based on settings suggestions about plugin to review randomly.

I made again a new survey with more questions with a new talk.

Later I made another time the talk but improved during the WordCamp Europe 2017:

My extension was mentioned on the handbook of the community.

In the last months after the WC Europe (in the period of August 2017) I joined as contributor the GlotPress and started to do patch and move features of GlotDict directly in the project itself.

I joined them because I suggested to use GlotDict as a playground of features for GlotDict because was more fast then wait months for the localizers (WordPress has 10000+ localizers).

The next release scheduled for October 2017 and never released (I am trying to ping on that) will include more features of GlotDict. You can see on GitHub this features.

I can see that this extension helped a lot of community because when there was the glossary I supported like over 20+ languages!

Now with the missing meetings of GlotPress I lost interest (I am working more on WordPress and core meetings for the Italian community) on that also because I have no time anymore to review localizations.

I received my first money donation on my open source project with GlotDict. 5 euro that for me was a lot and sent to the KDE community.

I started to get track of stats about downloads in April  2017 between Chrome and Firefox marketplace, for this task I made another tool.

I met people on Wordcamp that was using my extension and reached me to say thanks in live but also by chat. For me was very important because was the first time that someone was doing in that way outside GitHub or review on marketplace.

Now the extension is blocked about new features because there are no requests but seems that is enough, I am only fixing bugs and adding new validations. I hope that the GlotPress team start to do again meetings and release the 3.0 version.

If you want to know about the actual features of GlotDict, check here. I want to say thank you to all the developers that helped with code (mentioned in the readme) and with all the people that reported bugs.

The development of this extension helped me a lot to join better the WordPress community (also the Italian one), made a lot of experience about extension development (now I have 6 extension on my curriculum and GlotDict is not the most used).

Helped me a lot also about Mozilla to find something to do after the dead of Firefox OS and make new friends and talks.

I talk about this experience (in a quick way) at Fosdem in the previous years with a dev talk about it.

For this involvement on browser extension a year ago for the Mozilla Reps program was asked to do an experimental initiative about mobilizing the addon community with focusing on the Italian one.

A work of different months ended with a report. Now the Mozilla Reps program has a mobilizer part in the program because of this initiative.

It is interesting what an extension for a community can do with only 364 users globally but a lot of interest in live.

I saw different local WordPress communities that improved their workflow and documentation with a tool made for fun and later for needs.

I learned also to try pronounce the name of the project before to chose because GlotDict is like impossible to pronounce.

If you want know more about my experience on browser extensions check  here.