To speak of Firefox OS, Firefox Dev Tool and Mozilla. In addition to “recruit” new volunteers 😀

Notice is long because it contains photo 😀

The morning started with the codelab by Claudio dedicated to Dart and Firefox OS that has created an app in Dart. This app does a photo, apply two filters (sepia and gray tones) and then shares it with other apps. The application code has been explained piece by piece, and has demonstrated the flexibility of this language in addition to the simplicity of this type of Javascript app.

Then I could finally meet Mr. Gaetano/Chimera Revo for friends is Tanino. Too bad I did not know that there was only that day so I could not do the usual photos.

When it was the turn of my three talks:

There have been the usual questions about the possibility of putting Firefox OS on their mobile or tablet. Answer?
If no one makes a rom for that device is impossible. Interesting question about the teaching of Firefox OS in high schools that can open interesting scenarios.

I met Klez87 of our forum Mozilla Italy that is working on the Italian translation of MDN.

What do you dislike someone set the lock screen on my phone that I brought to show them but I guessed the code. Yes you were not funny. These things you can do in the Apple store but not to the volunteers.

However, the talks were an opportunity to present Web Components with my demo Brickly.

The fact of not having talks allowed me to talk with the other communities at the scene and be able to leave my desk. Between Ubuntu-It, PostgreSQL User Group, Lug various , Udoo, Open Source Day we talked a lot.

In the afternoon we could have a debate on Ubuntu Touch, Firefox OS and Android so I leave you the link of Chimera Revo who filmed the Italian debate.

A debate like this has opened my eyes about the events combined with Ubuntu Touch (you Riccardo that I know does not exist but otherwise it is not clear) and Firefox OS. Why I say combined events? The peculiarity of the event was that it was not designed for an audience of developers but ordinary people who love technology that does not want to be bombed with technical details but want to know the differences on various aspects. In fact, the debates on social and locally have shown that for an audience of this kind you have to make something more interesting. 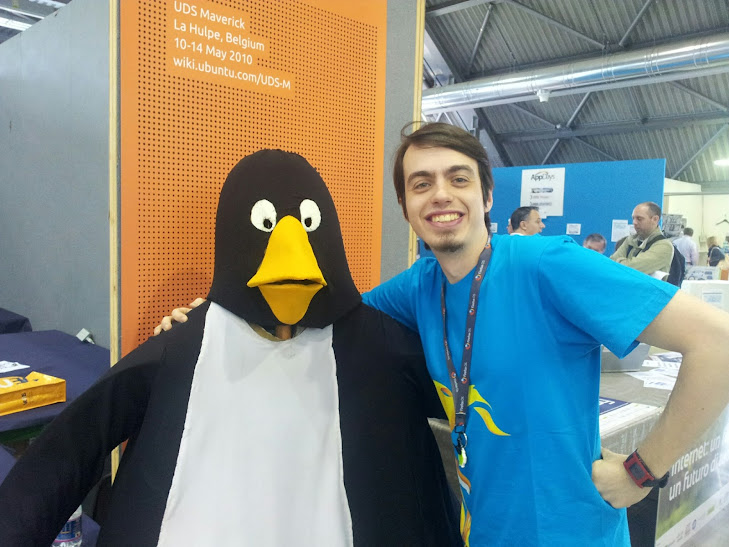 How about a location with monitor and joystick with a game WebGL running on a mini PC them via Firefox?
Nice idea isn’t it? Well thanks to this gamepad API in Firefox 29 you can do 😀

However, after the discussion with the guys of Chimera Revo I have done a little interview dedicated to Firefox OS I leave the link.

I took pictures comparison with Ubuntu on a Nexus Touch 4, and Firefox on OS Keon:

Start early the day because I have my three talk but the public is not interested in sitting on Sunday, but rather to do the shopping. In fact I was not the only one to have had little affluence which I am encouraged because initially I had no doubt that the topic is not of interest to anyone.

But I changed my mind when talking of Michelangelo of UDOO we talked about a possible Firefox OS on their board. That could be interesting for the idea that I wrote above and many others.

Francesca and Alberto of GDG Florence (the same event Mobile & Embedded ) with their modified version of GWT can do app for Firefox/Firefox for Android that takes advantage of WebRTC and with tag creates the 3D elements in Augmented Reality.

I was able to talk with Matteo PUG of WordPress and his support for PostegreSQL because it could make a difference to performance.

A seismograph made ​​with pieces of hard drive very Geek!

I could also talk to the guys at Rune Audio for a possible support of Firefox OS/Firefox and Firefox for Android through the Open Web App. I proposed the same thing for Volumio. We’ll see how my time will make it even more interesting these projects! Of course the problem is that I have only a Raspberry. But actually I don’t have problems with the SDs.

In this event I was able to speak with programmers more freely because the other times it is difficult in a single day and with the talks all the time to talk about this and that. I noticed that the question of Open Web App for maker is an interesting idea because often realize web interfaces for their work on the computer and have the web app.

The user reports, instead of me being so understand that having two phones to show not enough serve something that will retain. So I will get to work for a station as mentioned above (time permitting).

The question most often is the ability to install Firefox OS on older phones or tablets. Even the guys of Ubuntu Touch was told that is a common question. I’m sorry that people do not understand that it is not easy to build a ROM specific to each phone.

One thing I did like was the age of the Ubuntu Touch volunteers ranging from teens to adults which shows that open source has no age limits then kid or adult stepped forward to enter the world of Mozilla!

Given that speak to the debate I leave my opinion on this system.

The fact of being made ​​with the QT really like while the fact that is Ubuntu does not please me at all (I’m Debian inside and out).

The fact that it is made to bring together the mobile arena to the desktop with a single distro is very interesting and could eliminate the problems of the application that I wrote shortly ago.

The substantial difference, in addition to Mozilla and Canonical, is that the two systems pointing to the different markets at the moment.
Firefox OS at the low end but it is preparing to attack the media and beyond and to the market in the developing world while Ubuntu Touch pointing to the high and to the Asian market. This is obviously at the moment we will see how it will evolve in the future. Of course if we could make a Firefox for Ubuntu Touch like as Firefox for Android would be interesting.

Another detail to remember is that Ubuntu Touch is not yet commercially available (expected end of year) while Firefox OS as you know is already available.

I leave the group photos, and then the various photo albums!

I thank the organizers as Giovanni Longo, Paolo Garbin President of PNLug for having allowed my presence, Claudio/Francesca/Alberto/Massimiliano/Alessandro together with others of the GDG present for their interest in the field of Mozilla, Giacomo for your mozillian interest and feedback on the website/video (i wait some your project :-P), Matteo and Andrei of the PUG for their interest and chats from linux fanboy, Michelangelo di UDOO for the interest of a port of Firefox OS on its board (I can not wait to get news) and the guys in the Ubuntu community that is Dario, Riccardo, Giulio, Andrea and Mattia for their attempts to switch me to Ubuntu, but I’m hard to persuade and Mattia that with him I met all the moderators of WPItaly Plus (Massimo does not matter he is in Peru).

Thanks to Mozilla obviously for allowing me to participate in this experience!